Camping at Wilma Lake on the Aberdeen Plateau

Along with the Free Camping at Wilma Lake, I enjoy trying new hiking and camping / survival skills.  Normally I encourage the kids to build their own shelters and help them out as they progress.  For the Wilma Lake hike and overnight camp I planned to build one shelter for us all, some people call it a tipi.  I thought that if we secured one end of a long tarp near the top of the teepee tripod, we would find a way to spiral out the rest of the tarp to circle the tripod and enclose the shelter.  Then use some smaller tarps to close up the bottom of the teepee.

Well that didn’t work out but in trying to achieve the impossible my two sons and I experienced a great teambuilding project where we had to realize our goal could not be completed and come up with a alternate shelter.  – not without a few frustrations though. 🙂 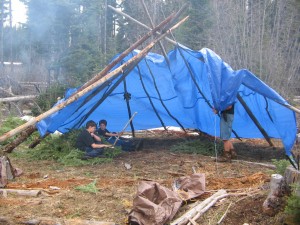 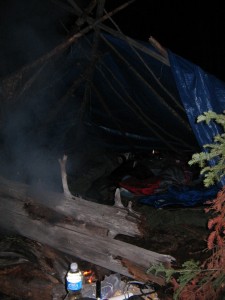 While we completed the outer shell, the other boys gathered firewood and bows for our bedding. 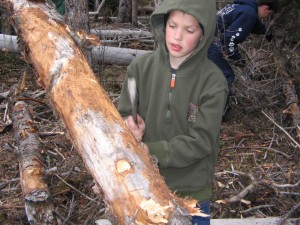 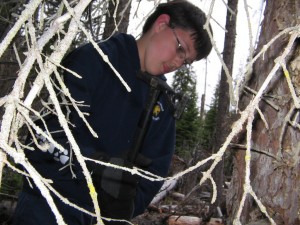 So the tipi turned into a lean to and if there was a chance it was going to storm, I would have suggested a shelter that would have been more enclosed. 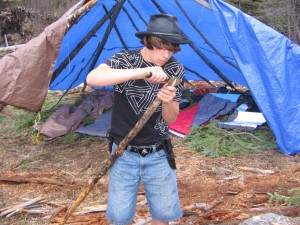 After the shelter was built we had some time for teaching some fire lighting and my Caleb tried his hand at making a wooden spear.  (It stuck into pretty much anything the first few throws! 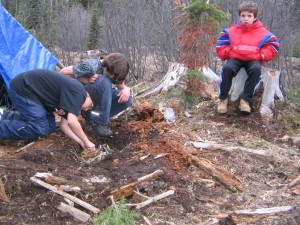 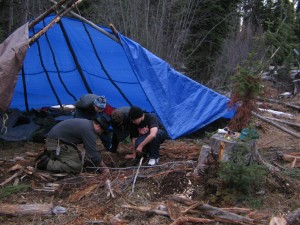 The fire in front of the shelter was a nice touch, along with some large blocks of wood that kept it burning long into the night and heating the inside of the shelter with its radiant heat. 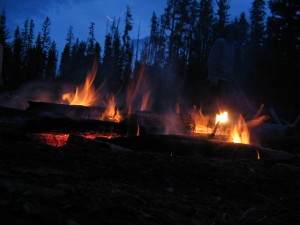 Our plans of hiking (bushwacking) around Wilma lake to find the top of the East hill and view the neighbouring Doreen Lake were cancelled when my water pump broke.  The shaft inside the pump seperated and made it impossible to use.  We packed in enough water to last the first day but would require filtered water to hike the second day.  Instead we left early for home after cleaning up our camp and packing out the empty burnt tins and such.