The summers hike up to Bogatin with me dad

Me and my dad decided to go up to Bohinj and climb at least one of the mountain peaks of the Julian Alps surrounding the lake. We planned to stay overnight on the mountain lodge Komna in order to be able to visit one mountain peak the first day and another one the next day so I prepared my backpack with a couple of items to help me on the way. I packed some clothes, some food and of course something to drink since I find it very important to stay hydrated on long trips.
So the following day me and my dad start off early in the morning. We travel to Bohinj and we get there so early that there was no one there yet to charge us for parking at the lodge. So anyway we take our backpacks out of the car and take off towards the first checkpoint the mountain lodge Komna somewhere at 1520m way up there on the mountain. 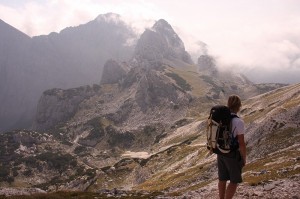 View while hiking in the Julian Alps Slovenia